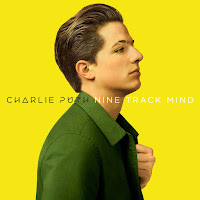 You may not know who Charlie Puth is, but you have definitely recognize the vocals. The Wiz Kahlifa track, "See You Again," features the singer who released his album debut, "Nine Track Mind." The elegy that introduced the world to Puth appeared on the Furious 7 soundtrack and it certainly grabbed the attention of all America mourning the death of Paul Walker. But not solely for Kahlifa's efforts, everyone wanted to know who provided the crystal clear hook on the track. The is pop & old school R&B and so is Puth at his core. "Nine Track Mind" is filled with G-rated/ PG-rated material and for someone of his age (he was born in 1991), at least a few PG-13, if not R-rated tracks are essential. I am not by any means insinuating that he must do that, but all of the source material for the tracks border boring. Yet his tenor vocals always soar high above the songs. It's not pop perfection, but it is perfect. Puth without a doubt has talent. He can't be chastised for his first album, Puth is still figuring out how to use his falsetto voice and songwriting abilities.

On "One Call Away," Puth uses the sweet spot in his falsetto to extend an arm to a crush or friend who are in that crucial make-it-or-break-it stage of the relationship. There is a tint of cliche in this track, however it is a great album opener. Puth shows off his vocals (accompanied by a piano and drum, as many of the tracks are) and songwriting ability, even if the material is cliche. Each singer is entitled to deploying cliches (or be borderline cliche) every once in a while. "Dangerously" flips the sentiment from new relationship to doomed relationship. The ode to a legend, appropriately titled,"Marvin Gaye," features Meaghan Trainor. The track is about getting it on, without making it hot and heavy, it unceremoniously simmers with sexy appeal and shows off both singers pipes. It is a throwback track musically and lyrically, with the drum and piano led track. You can't help but admire the amount of puns one can cram into a track using Marvin Gaye as the inspiration. The next track, "Losing My Mind" is the most promising on the album, besides the first single. Puth really dug deep with this track to mine some personal fears. The track is about not being able to write a song.

"We Don't Talk Anymore" features Selena Gomez. YES! I said it. How did he snag that? Puth easily slides into the upper register in his voice and Gomez's breezy whisper compliments him in this flirty way. The duet turns into a thematic back and forth between the two singers discussing a lost love. This is the closest listener's will get to PG-13 material this albums yearns for. This is one of the most relatable break-up songs, let alone duets I've heard recently. Both singer's vocals engulf the sections they don't sing in as back up vocals, adding to the emotion of the lyrically intent. "My Gospel" is crammed with claps, bass and Puth creeps from sing-rap to singing without any effort. It is a shame the song doesn't do much. "Up All Night" recounts the journey of a bruised lover, longing for companionship. It only wipes the dust off the surface and doesn't dig deeper for any emotion. This is such a relatable topic, it's truly a tragedy that he didn't dig deeper.

"Left Right Left" picks up after his bruised ego begins recovery from heartbreak. Another ballad, what! "Then There's You" floats as a love song and listeners hope it doesn't sink with his obvious pickup line, "There's beautiful, then there's you." Then it transitions to the next track, a ballad titled, "Suffer" is slick and soulful with its finger claps and echoing ohhhs and ahhs. The story line arc from "Then There's You" continues, perhaps? Or it could be another love. "As You Are" brings the album full circle with sentiments reflected in "One Call Away" and features a rap section by Shy Carter that isn't rough and crude. The immediate harmonizing of "Some Type of Love" sets the tone for a cheesy mid-tempo track. Puth shows off his ability to play with tempo, lyrical content and sonic with ease. This song shows much promise, perhaps the next single?

Puth treads over topics with light feet, not in a cautious, but an underwhelming manner. Sadly most of these songs are not memorable, but his voice is unforgettable. There isn't much here to bop your head to or something to wallow in. I commend the album for having a story arc of heartbreak that starts with budding love ("One Call Away") and circles around to heartbreak ("Up All Night"), picking up with new love ("Then There's You"). He keeps himself afloat with PG material that softly burns in romantic obsession.

Check out all things Charlie Puth at www.charlieputh.com.
Email ThisBlogThis!Share to TwitterShare to FacebookShare to Pinterest