Album Review: This Is What The Truth Feels Like [3/5 stars] 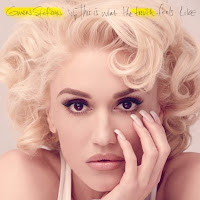 Gwen Stefani's third studio album marks her first return to a recording studio for something other than two tracks released in early 2014. Sadly, "This Is What The Truth Feels Like" is not profound or groundbreaking in any way. Stefani is making it clear that she didn't set out to write an album, but she needed to write to overcome her personal woes. Music isn't always about being groundbreaking; and for someone who will make sure that all of the 90's babies will never forget how to spell banana, you don't expect the worst or the best from her. It has been nearly a decade since she has released an album. Stefani is great at producing a mixed bag of tracks, but in a good way. She is great at producing pop tracks and is equally great at paying homage to the rock/ska music that allowed Stefani to secure her spot in music history.

Each track has meaning to Stefani and it is speaking her truth, whether we accept it or not. Stefani has endured her fair share of betrayal in the past year, but she has also allowed herself to release it all via music and come out on the other end happier. Gavin Rossdale betrayed Stefani (his wife), in a this marriage is over kind of way. The public will never know the entire truth, but we don't need to know for two reasons 1) She has moved on from it, so should we and 2) Stefani found someone to remedy her betrayal, fellow The Voice judge and now beau, Blake Sheldon. This album is stream of consciousness-like. It feels like Stefani took the feelings from her journal and used that to create an album.
"Misery" starts the album off on a reggae flavored pop track using a "you're my drug" anecdote as a plea for someone to come save her from the misery she is currently in. Practically begging for a rebound relationship. The electro pop vibe on "You're My Favorite" makes the track a head bobbing, finger snapping, feel good song. "Where Would I Be?" has a tropical beat that continues Stefani's sentiment from the first two tracks about her new beau. "Make Me Like You" is cleverly titled and perfectly crafted pop track. At first, you think it is a anger filled song meant for her ex-husband, but within the first 30 seconds it's clear it isn't. Instead it is an ode to her new beau, with lyrics like, "Why'd you have to go and make me like you? Yeah this is a feeling I'm not used to." She is also isn't drowning in a pool of her sorrow and claims, "I was broken but fine. I was lost and uncertain, but my heart was still mine." It is worth checking out her live music video for the track as well. Click here to give the video a view. It was performed as a live commercial break during 58th Annual Grammy's telecast as part of the deal with Target, which also doubled as warranted and one of a kind advertisement for this album.

With its snapping snares and guitar backing, "Truth" is a thank you to her new beau for showing her the grass is greener, even though she knew she'd seen the green grass, she never thought it would be from her co-worker. She is enjoying the uncertainty in dating for the first time in a long time, but still must navigate motherhood. This sweet moment is followed by a flashback to the moment when Stefani cried for the first time over her divorce. "Used To Love You" includes lyrics such as "I don't know why I cry. But I think it's cause I remembered for the first time since I hated you, that I used to love you" that pack a great punch and execute the jab leaving the opponent on the floor, breathless. You can't help but want to cheer on Stefani. She is spilling the beans about her life in the ballad, without giving away too much. She is showing off her scars to the world, but most importantly sending an open letter to her ex-husband. Nothing is more powerful and inspirational than a person who is broken, but free. I wonder why "Baby Don't Lie" was not included before this track. Despite being released long ago, it is without a doubt the other half of the story.

The mid-tempo track "Send Me a Picture" shifts focus back to her new beau. She is on one side of the world and he most likely is on the opposite. The sentiment is cute, in that high school way. But it packs in this adult adult agenda behind wanting a picture. Clearly the love fest doesn't last long, in "Red Flags" Stefani is mad at herself for letting her ex-husband get away with whatever he got away with, despite the red flags. "Asking 4 It" features Fetty Wap is filler material, sorry y'all. The sentiment is there, but that's about it. Stefani saves all of her sarcasm and courage for the weebly-wobbly "Naughty" that is a finger snapper. Obviously this track is tailor straight for the inbox of her ex-husband. The orchestration of sounds is a standout as well. It starts off as a finger snapper (literally and sonically) synth track and tumbles into warping together those sounds with piano notes and strings instruments, but keeping the synth pop predominate. "Me Without You" is throwing a punch at her ex-husband and empowering to anyone. She is not allowing him to creep back into her life without any exceptions and she is swooning over the  new guy (and maybe the rebound guy) in "Rare" with a cliche of sentiment.

The deluxe version, featuring four extra tracks is only available at Target (online or in store). "Rocketship" has an experimental orchestration of synth pop loveliness as first, but doesn't go too overboard, only to be met with finger snaps. "Getting Warmer" addresses her new love with a new man. She is playing a metaphorical game of hide-and-go-seek with her feelings. There is some uncertainty if she is actually in love or if he is a rebound. "Obsessed" is playful track that uses her nah-nah-nahs and voiceover section to keep it afloat. "Splash" is her last proclamation about jump into love and not caring about aimlessly splashing around, she wants to make a huge splash.

Happiness is the only thing that matters in the end. This Is What The Truth Feels Like is definitely not a breakup album, what Stefani went through was much more jarring than that. Her marriage of 13 years fell apart and she was left to pick up the ruins. She is still the same ageless California beauty on the other end. During her her decade long hiatus from solo music, she released an album with No Doubt and had three children, Kingston, Zuma, Apollo with her now ex-husband and one (of the two reasons) this album came to fruition. Stefani spends the entire album between spitting disses towards her ex-husband in the classiest of way and throwing herself at the new beau, without doing it in a spiteful way. She effortlessly corrals the many sonic influences into what I am calling ska - dancepop - electronica perfection.

Check out all things Gwen Stefani at www.gwenstefani.com.
Email ThisBlogThis!Share to TwitterShare to FacebookShare to Pinterest