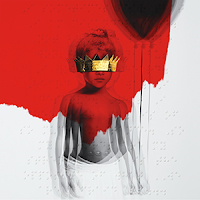 Rihanna doesn't care whether you like her music or not. She is not in the business of apologizing or being modest. Her eighth album, "ANTI" (deluxe version) doesn't lack in her assertive way of grabbing life, even though she is carefree human. There is a theme to this album: disappointment and coping with it. Rihanna is relishing in her fame. She can be caught making faces at the paparazzi; on a yacht; smoking a blunt with a cocktail in hand; rocking her latest fashion acquisition or any combination of the aforementioned. In the year up to the album release, Rihanna cranked out three superb singles, (Bitch Better Have My Money, FourFiveSeconds and American Oxygen) that ultimately did not make the cut for this album.

This psychedelic rock/ soul sound has turned her into an album artist that can still crank out singles. Israeli artist, Roy Nachum created the "ANTI" cover that features a photo of Rihanna on the first day of day care. She is holding a black balloon and rocking a gold crown that covers her eyes, there is a dripping smear of red from the top to mid-point. The image of Rihanna is blurry and there is a poem by Chloe Mitchell in Braille. In fact, the album contents don't include any text, except for the text translation of the front cover poem on the poster inside. According to an interview with Billboard, the singer said, "Sometimes the ones who have sight are the blindest." The poem is a statement about the vision of the album. The album booklet offers more art and poetry by Nachum or Mitchell respectively. Thanks to Mic.com, you can read the 5 poems. The statement these two concepts make elevate her album above the rest. Music is not always meant to be heard, but felt and Braille can only be felt. Appreciate the little things in life, before they are gone and you are left feeling your way through life. To read more about the artwork, click here and to view the artwork courtesy of Amazon.com and VanityFair.com, click here.

The album starts off with the Reggae tinged duet "Consideration" with SZA; Rihanna uses her native Bajan accent to croon on this song. The pop mentality of Rihanna and sonic of SZA's alternative/ soul make this track a perfect collab to start the album and swing right into the next track, "James Joint." This interlude is the aftereffect of a marijuana and effortlessly brings listeners to "Kiss It Better," a ballad that recounts the tail of an ex-lover trying to get back into Rihanna's life. She knows it's wrong, but loves it. This song is catchy, from the first electric guitar riff to the sing-a-long hook. This track is the sad song we want to blast on a sweltering summer day. We've all heard and twerked to "Work" featuring Drake. This song is going to undoubtedly be on every summer playlist. The song is relatable and not because it is a club hit. The jam is discussing being let down by a lover with lyrics like "I believed all of your dreams are fruition. You took my heart and my keys and my vision. You took my heart off my sleeve a decoration." And Drake swoops in to remind Rihanna that patience is the key. No matter how many tweets about how Rihanna was speaking gibberish, this track is fun and serious.

"Desperado" follows the same Americana themes as "American Oxygen," and "FourFiveSeconds. " The sexy and synth bedazzled "Desperado" is pleading for companionship. The abrupt nature of jazz inspiration in this track is the perfect vessel for lyrics such as "Desperado, Sitting in a old Monte Carlo, A man whose heart is hollow." "Woo" continues the thought started in "Kiss It Better" and Rihanna is relentlessly chasing her ex-lover who still loves her proclaiming thoughts such as, "Let me know when you're ready to plea." The track is supported by two jarring atonal guitars and features Rihanna vocals with some distortion reminiscent of 70's rock. The song gives me a headache, but Rihanna is doing this so you can get into the mindset of the track. "Needed Me" is a kiss-off, downtempo track with heavy bass with a diss to a hook-up. She takes the chance to show off how bad-ass she is with lyrics like "You was just another n***a on the hit list. Tryna fix your inner issues with a bad bitch? Didn't they tell you that I was a savage." Her rough and raw nature translates to sweet and raw in the sex craving ballad "Yeah, I Said It."

"Same ol' Mistakes" is a dreamy cover of a Tame Impala song, "Same Person, Same Old Mistakes." It uses the same production elements of the original track inspired by a psychedelic, hip-hop and rock sonic. The track is a slow track that takes the time to let it all sink it. The artist played it safe by covering the song that is less than 6 months old, she beat the rest to the punch. "Never Ending" is a sad Country fused ballad with an honest confession by the unapologetic singer, she wants to be in love . The production is sparse and meant to mimic a live performance. Plucked from the 50's, "Love on the Brain" is led by sweet vocals and a guitar. She is singing about her feelings about a lover while under the influence of drugs and/or alcohol. This doo-wop track allows Rihanna's vocals to swim with ease to this sweet spot. The sentiment in the last track spills over to "Higher," an unsophisticated and simple ballad where she is pleading for companionship. The slow sizzle of "Close to You" layers vocals and piano notes to craft a perfectly somber ballad and softly fades into oblivion with this calming feeling after the thunderstorm of emotions.

The deluxe version of "ANTI" includes three tracks. "Goodnight Gotham" contains a sample of "Only If for a Night" by Florence and the Machine. This song is not, well, a song, but a interlude and I could see how it landed on the deluxe version. Rihanna takes a moment to cherish in her riches and badassness on "Pose," without any care of subtly or modesty. The wobbly song "Sex with Me" could have been juxtaposed with the statements of "Desperado." She is crudely drawing in a man with sex and then asking for companionship as well and brilliantly ending the album with a experimental sound. Both the deluxe and standard version of the album make sense. Most times, the deluxe version is either composed of random tracks or tracks that do not deserve bonus track treatment.

"ANTI" doesn't need flashy production because Rihanna's vocals shine brighter than diamonds in the sky. She sways from the rock to pop jungle with ease. She doesn't take any of the vines used to switch between both for granted. There is a story arc; Rihanna's vulnerability is clear, even when she is gritty. The self-reflection is relatable and at the same time she is able to leave her signature attitude on each track. This album is the result of leaving the life style of the rich and famous behind momentarily to check your emotions and well being. The swagger she has isn't fake or half-assed, she is going to display all of her colors and let the vultures dissect the album as she smokes a blunt and gives two fucks.
Check out all things Rihanna at www.rihannanow.com.
Email ThisBlogThis!Share to TwitterShare to FacebookShare to Pinterest