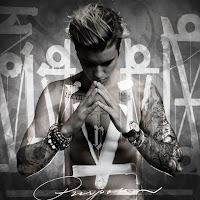 What happens when you were introduced to the world in 2008, released 3 albums, toured the world and had a part bio-pic, part concert film released about you in the span of 5 years—then you lost your way in the world and found your footing? Your name is Justin Bieber and you released your fourth studio album, "Purpose" that marks where you stand now, with two feet on the ground and much maturity. This album is sonically cohesive and the lyrical content marks this diary like confessional as his entrance into manhood. He is humble, truthful and asking for repentance from anyone in his life (or any lost relationships), including fans while seeking redemption for his reputation. Bieber also released a 42 minute film "Purpose: The Movement" that weaves together a series of track-by-track dance sequences inspired by pop, hip-hop, R&B and EDM music on the album.
"Mark My Words" is the prelude track held together with two layer of Bieber's vocals and a few piano chords. His vocals are not contorted and goose-bump worthy, this leads into "I'll Show You," a simple rack led by synths and inspired by R&B allows his vocals to soar. This track sounds like the table of contents for the album. He is telling the world to give him a break with lyrics such as, "Sometimes it's hard to do the right thing, when the pressure's coming down like lightning. It's like they want me to be perfect. When they don't even know that I'm hurting. This life's not easy, I'm not made out of steel."  Sympathy is the sword he uses and fame is the shield.

"What Do You Mean?" is a outstanding dance track that also has meaning. Bieber is singing about an ex-girlfriend who confused him with everything she said or did. His stance is mature, the song is reflecting on the relationship as he is deciding that it is time to end this. He is asking this person to stop playing games or he is leaving; and in the next track he apologizes, but only because he feels the need to. Not because he wants to, with reasons like: "you gotta go and get angry at all of my honesty." "Sorry" is the very lovable love child of R&B & synths. Bieber takes a sharp turn from vulnerable to vengeful in this diss track. In "Love Yourself," Bieber takes the time to make sure the entire world knows that he is way, way, way over Selena Gomez in this Ed Sheeran-esque acoustic diss ballad. Perhaps this is an attempt to aid the world in getting over the relationship as well.

"Company" is the track where Bieber has let out all his woes about a past love and wants to move forward. Even though he is known world wide, in this instance he wants to be a nobody who can hook up with a girl because he is searching for someone who wants the same thing: something committal, but regular. "No Pressure" is a simple R&B ballad featuring a clever name dropping rap by Big Sean (give it a listen to find out what I mean). This song has two functions: (1) A slow jam to grab the attention of the girl he did wrong, but both want to work it out (2) A jam that partially is asking for forgiveness from the world.

"No Sense" is auto-tuned, hip-hop inspired garbage to me. But for Bieber, it does not seem that way. He got to work with his favorite rapper and the song lyrical content appears to have some meaning to Bieber. This entire album does not have to be embraced, it is for Justin Bieber to find his purpose. Of the 3 features on the standard version, this duet is one is my favorites. Bieber sings in his falsetto in "The Feeling" and is joined by Halsey in this mystical low key R&B track led by synths & drums. Bieber being subtle is a much appreciated break in the album; the silky smoothness in his vocals is continued in "Life is Worth Living," the second ballad on the album that features vocals with the piano chords that conjure the feels. This is easily the most genuine track on the album.

"Where are U" creates a track makes an intelligent statement about the next generation. The juxtaposition of the ballad sections and EDM section is not logical. The lyrics of "Children" fit the concept of the album, but the Euro-disco beat confuses my ears. If the entire beat was a club song, without lyrics, that would work. Many components of the beat need to be stripped away or rearranged to be less obnoxious.

"Purpose" is the last track of the standard version (and sadly the last instance a piano ballad appears). The conclusion of sorts, if this was a book. The track takes a moment to thank to every instance he lost his way in life and thanks those moments for guiding him back to finding purpose. In a not-so-subtle way, the voice over at the end is a nod to Selena Gomez (she has a voice over on her track "The Heart Wants What It Wants"). This song is important to the album and Bieber as he nears the end of the cycle of repentance. The voice over has this weird affect on you as a listener. When he says things like, "We weren’t necessarily put in the best position to make the best decisions. You can’t be hard on yourself for it, these are the cards you were given so you have to understand that’s not who you are. You know you’re trying to be the best you can be, but that’s all you can do. If you don’t give it all you got, you’re only cheating yourself. Give it all you got but if it ends up happening, it ends up happening,"

Five songs are on the deluxe version of the album, but it's hard to see why these track are considered as such. "Been You" perfectly mixes 80's disco and pop music where he is still singing about this ex-girlfriend (ehum, Selena Gomez). This song deserves to be on the standard album. He is reflecting back on the situation astounded it was her that kicked off this search for purpose and wishes he could wipe the slate clean. "Get Used To It" is subtle and catchy, with a pinch of synth, a big dash of smooth drums and a heavy dosage of pop. "We Are" featuring Nas is a good party background music and high quality album filler track material. "Trust" is another R&B/ Hip-Hop ballad that belongs smashed between "No Sense" and "Life is Worth Living." "All In" is a perfect way to end the deluxe version.

Bieber is able to marry great music and his honesty about the affects of fame on his life without turning it into a frenzy. "Purpose" allows Bieber to sort through the highs and lows in his life through music. Sonically it reaches many different places, but remains cohesive. He is vulnerable, repents for forgiveness, disses his ex-girlfriend, recognizes that people will come and go, and shows off the maturity in his voice and himself as a young man. The production is beautiful, daring and shows off that Bieber can use his vocals in different styles of music, but still remain grounded in his roots. He has found his purpose and he won't stop.

Check out all things Justin Bieber at www.justinbiebermusic.com.
Email ThisBlogThis!Share to TwitterShare to FacebookShare to Pinterest