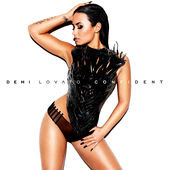 Demi Lovato's 5th album "Confident" is straightforward, catchy and very personal. The last 2 or so years of her life have been filled with some of the toughest times in her life. Lovato doesn't spend any time being cryptic with the track list and comes out on the other end with this swagger. She doesn't stumble or wobble. She is confident and nobody can stop her, even if the songs aren't the best choices. I'd be interested to see the list of tracks that didn't make the album. The album gives listeners a bit of everything—Lovato is angry, inspired, hurt and mournful, but most of all confident. You'll feel inspired after jamming out and crying to the roughly hour long album.

Lovato "Confident" is a catchy self-empowering track that could get anyone bobbing their head to. The music doesn't overbear Lovato's vocal performance. The finger snapping in the chorus gives the listener a chance to sing with her. In "Cool For The Summer" Lovato takes us down into her paradise; she doesn't hesitate to gush about her brush with someone of the same sex. This song is also self-empowering and encourages you to be curious and impulsive. Although the song roots from an experience from Lovato's life, this song is empowering the entire world to be who they want to be and to exude confidence. "Old Ways" is her ode to the past as she confidently moves into the future. The rest of the album is mixed bag of tracks. But that isn't a bad thing in this situation. Some of the songs are not great, but they are not complete rubbish either. Her vocals are top notch on every song, it just boils down to preference.

In "Stone Cold" Lovato's vocals accompanied by a piano allow this ballad to easily become a song someone would listen to and cry. The first time I heard this song as the train, I got goosebumps. The lyrics are straight forward as she croons out lines like, "Even if I can't understand, I'll take the pain. Give me the truth, me and my heart, we'll make it through. If happy is her, I'm happy for you." You can feel the heartbreak in her voice and it doesn't sound forced. She is trying to be happy for her ex who is happily in another relationship.

Iggy Azalea's feature on "Kingdom Come" isn't needed. The lines could have been rapped or sung by Lovato. I'm all for collaborations and female empowerment, but this feels like a last minute adjustment to a song that that didn't need any additions. Sirah on the R&B tinged "Waitin For You" does add some variety to the track. It is catchy and shows the world Lovato can show off her vocals in many different styles of music. This collaboration caters more to the confident theme of the album, rather than being a good track.The layering of her vocals and the filtered effect on her voice draws listeners in.

With "Lionheart" Lovato redeems herself and the album picks up. Her vocals are not layered or masked by filters and the simple drum and guitar sound are reminiscent of the Demi the world first met. It could make any listener think about that certain someone. "Yes" is a catchy single that will allow Lovato to create a sing-a-long for live performances during the chorus'. "Yes" has me rocking my body back and forth and eventually my arms will end up in the air waving back and forth. The standard version of "Confident" closes with “Father,” an elegy dedicated to her biological father; he two have been estranged for six years, until his death in 2013. Lovato goes through the stages of grief, singing about sorrow, regret, guilt and anger. She is wrecked, but forgiving as she exposes herself in a jaw-dropped, tear inducing finale which allows her to mourn his death on her own terms. It leaves listeners shaken, shocked, feeling emotional and introspective.


The deluxe version has 4 tracks: "Stars" and "Mr. Hughes" are ego driven, yet honest tracks that pack a punch, but paired with the tracks before them, they lose meaning following "Father." "Stars" is self-empowerment at its best and "Mr. Hughes" is a diss track to the guy who had, but lost Lovato's heart. The Jump Smokers Remix and Suraci Remix of  "Cool For The Summer" are the last two tracks.

Each song addresses a different topic and her voice shines in every track, "Confident" is a powerhouse album. She tackles any topic from her sexuality to the death of her father. Nothing is cryptic, her confidence is crisp and clear—without feeling redundant. However, in comparison to her last album, "Demi" this feels like a step back, instead of moving forward. She is being provocative and juxtaposing it with ballads. This mixed bag of songs marks a new era in her life.

Check out all things Demi Lovato at www.demilovato.com.
Email ThisBlogThis!Share to TwitterShare to FacebookShare to Pinterest