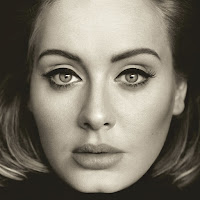 After garnering much attention with her album 21, at the ripe age of 23, Adele was thrust into the spotlight with her smoldering voice and sharp wit. On her album "25," it appears as if her softer approach to songwriting is a dud—but it is not—it's refreshing for someone of her age to remain eloquent in her lyrical content and vocal delivery. Adele uses this album to show off her gigantic vocals, without being bombastic and never permits the musical orchestration to overpower her vocals. The albums is packed with a array of tracks backed by a polished production. Her vulnerability always shines through as she confesses about life and/or love. Her tongue-in-cheek style wavers as she's made an effort to be not so angry.

The album starts off with the overplayed track "Hello," which was released and immediately landed on the top of the charts. This elegant song is overplayed because it is relatable. Adele is a master of taping her emotions, but knowing what will trigger a response amongst listener's of her music. This piano led power ballad will instantly make you think of a loved one that was lost in the shuffle of the world. She comes to terms that this relationship will never have closure. "Send My Love (To Your New Lover)" is what we all imagine how the talk would go if Adele encountered one of her ex-lovers. This sassy song is a departure from the typical sound of Adele. The electronic percussion is the perfect avenue for her to gracefully serenade us with truth.

"I Miss You" is a mid-tempo track stolen from Florence & the Machine. The percussion and drums allow Adele's voice to soar and the vocal layering engulfs your mind taking you further into the world of the song, certainly conjuring memories of lost love. THE ballad of all ballads is "When We Were Young," Adele let her demons write this song and invited nostalgia to the writing session. With lyrics like "My God, this reminds me of when we were young. Let me photograph you in this light. In case it is the last time, that we might be exactly like we were," there is no holding back any emotion while performing or listening to the song. She is preaching to the choir (er, fans) while she croons about fleeting youth. Simple production, her voice shines as she croons her sorrow and regret away. You'll start by snapping your fingers to the beat and then end up crying—it's that simple with Adele and she waits until the final moments of the song to let out a high note that is spine chilling in its live and album incarnation.

Alternatively, "Remedy" is a piano led track dedicated to enticing a lover to continue loving. It is pure bliss to hear her vocals and just a single piano. The song must have been inspired by her current beau and father to her child, Simon Konecki. The message is super simple, but not dull and her vocal delivery will inevitably concoct memories, good and bad, as does the next track (and my favorite car jam) "Water Under The Bridge." The sentiment in this track is intense and poignant and balanced by the lighter musical arrangement that borders gospel-pop by corralling the hand claps, drum clashes, tambourine clanging and backing vocals into perfection. "River Lea" begins with organs, Adele's vocals come in confessing things like, "There was something in the water that’s now in me… My heart is a valley, it’s so shallow and man-made." Adele blames her ability to hurt people on it being just the way she is, the way she grew up, using the River Lea in her hometown of Tottenham, North London as a metaphor.

You are heartless if "Love in the Dark" doesn't make you cry. This song is "cruel, to be kind" and Adele allows her voice to dig deep into the emotions of the song that is followed by a simple, piano and violin sound. This breakup song belongs in some sad flick, where the ending is not a happily-ever-after one. There is some unintended irony in a song that is filled with string orchestration, but the lyrical content is about cutting them. "A Million Years Ago" is packed with acoustic guitars and bass as Adele addresses the effect fame and celebrity has on her life. She is vulnerable as heck in her yearning for the days before fame, but the tone is grateful for both chapters in her life. Her vocals and the haunting hums make your spine tingle.

"All I Ask" is a simple ode to a lover. The key change allows her falsetto to shine and the piano allows her voice to shine, per the usual. "Sweetest Devotion" is lyrically and sonically happy, finally Adele! (joking) She may not always live in bliss, but her ability to navigate change and sadness is her strongest ability. The finale ends on a bittersweet note, as all things should and Adele gets that.

Adele faces life straight in the face and handles the painful reality of what she sees. This allows a lifetime of regret and wounds to culminate in effortless pop. Adele's wounds are still open and I don't think she will ever stitch them up. This album deploys many clichés, but they never become schlock coming from the lips of someone as careful and reckless as Adele. Being cuddled and kissed by her voice is all any fan requires; Adele does not need to rely on the orchestration to dazzle any listener.

Check out all things Adele at www.adele.com.
Email ThisBlogThis!Share to TwitterShare to FacebookShare to Pinterest