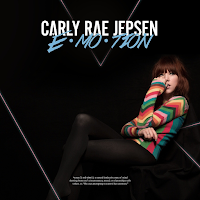 Carly Rae Jepsen's third studio album, "Emotion" (stylized as E•MO•TION) is perfection, the kind of pop that is heavily inspired by synth's of the 80's and alternative music. This album also answers the question we've all been waiting for: will Jepsen be a one hit wonder after "Call Me Maybe," her overplayed and over parodied 2012 debut single? The answer, no! Jepsen is always successful in the execution of her projects, it doesn't matter who is paying attention. Her sound has evolved ushering in a new sophisticated approach that nods back to her pop roots. This is perhaps one of the most underrated pop albums this year. NOTE: The album cover says: *noun (\i-mō-shen\): a natural instinctive state of mind deriving from one's circumstances, mood, or relationships with others. ex: "She was attempting to control her emotions"

Album curation nowadays is formulaic; an array of songwriters and producers are corralled and months later, there it is, an album is erected. These songwriters are producers usually include a 90's superstar and a few hip-hop, R&B and/or pop producers; they are joined by European based producers and occasionally Sia stops by. Even though the collaborators come from every corner of the world and musical sphere, (some include Shellback, Mattman & Robin, Greg Kurstin, Sia, Ariel Rechtshaid, Dev Hynes, Sebastian Lundberg, and Vampire Weekend’s Rostam Batmanglij) the album is cohesive sonically.

The album starts off with a summer-esque anthem, "Run Away With Me" that introduces listeners to the style and sound of the album with ease. It starts with an army of trumpets and dips right into synths and echoing vocals. It is not a smack in the face, but it isn't subtle either with it's arrangement of synths, piano and guitar. "Emotion" is a guitar driven track supported by drums, synths and the vocal reverb plucked off an 80's jam. Conceptually it is a great interlude to the rest of the tracks. "I Really Like You" is obviously an attempt to convert the goofiness of her "Call Me Maybe" fame onto this album. But I don't hate it, nor is it a bad track. It is an innocently playful track that roars loudly with its head bopping really really really really repetitive hook, (hear the song and it will make sense). It takes a super simple route to convey an emotion that hasn't achieved love status and uses the word really 67 times, really? In the end, she waltzes through the track without creating a commotion. "Gimmie Love" is a catalyst to allow Jepsen to show off her voice and the sound bursts into an 80's throwback track created with purely synths. Jepsen's vocals shine brightly in "All That," a  Prince (...or Cyndi Lauper...or Michael Jackson) inspired ballad that will illicit, hand swaying or lighter waving. Penned by Sia, "Boy Problems" is sassy and sparkly We're only six tracks in and the album has churned out vastly different tracks, within the realm of 80's pop. Wow, impressive!

"Making The Most of The Night" is head bopping grooviness that balances heavier topics with lighter themes as she skips through another track. The next track, "Your Type" is bitter displaying the emotions of unreciprocated love with lyrics such as "I'm not the type of girl for you." "Let's Get Lost" is 80's perfection with its vocal layering and moments of hand claps and solo singing backed by "ooohs" and "ahhhs." In "LA Hallucinations" her producers curate the track that has become the norm on each album. We all know that most albums take a stab at discussing the darker side of fame and celebrity (Am I wrong to assume everyone knows this?). This electro-pop confection includes lyrics like "Buzzfeed buzzards and TMZ crows, what can I say that you don't already know?" that make the jab harmlessly sarcastic. "Warm Blood" is produced by Vampire Weekend’s Rostam Batmanglij; it is a romantic track with an acceptable amount of bizarre complete with a crammed production of weird noises. "When I Needed You" sounds like a cover of an 80's song, but it is an original track. "When I Needed You" is a perfect track worthy to play over the credits. It has enough content, but not overloaded because the producers wouldn't want you to miss the big names scrolling by or the bloopers.

The deluxe version of "Emotion" features three tracks. "Black Heart" is too peppy to have the word black in it and isn't sad at all. The vocal layering of the back and forth is impeccable. Why was this not on the standard edition? It is inspired by the 80's, but rooted in new wave electronic "I Didn't Just Come Here To Dance" is groovy, clothing store music and will inevitably end up remixed by club DJ's. "Favourite Colour" should have been an interlude somewhere in the middle of the album or fleshed out more to be a full fledge upbeat peppier track.

In each track on this album, Jepsen's voice hits a sweet spot. Jepsen is a masterclass pop artist that will always produce earnest tracks with a great sense of great music. Pop artists convert attitudes and emotions into gestures so perfect they can take on a life of their own. She doesn't stamp her identity on any of the tracks, which is a one glaring imperfection on a piece of pop perfection. Jepsen knows the lowest-concept songs can pack the biggest emotional wallop and embraces the 80's, (as Jepsen says in an interview with NPR after workshopping roughly 200 songs for "Emotion,") making this album flooded with extraordinary moments lyrically and sonically.

Check out all things Carly Rae Jepsen at www.carlyraemusic.com.
Email ThisBlogThis!Share to TwitterShare to FacebookShare to Pinterest