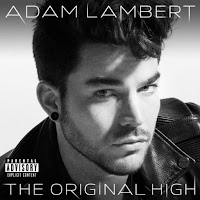 After leaving his record label over “creative differences, “Adam Lambert has come out with his third studio album, "The Original High" under his new label Warner Bros. Records. Although the world would have relished in a cover album of 80’s hits, we would also understand his reasoning for not wanting to do it. Unless that is their niche, what artist would want to come out with a full-length cover album? Nonetheless, the masses would have found solace in the concept. Lambert’s first album, "For Your Entertainment "introduced us to the glam rocker he is, "Trespassing" marked the bridge between finding himself and revealing personal details about his life—and his latest release allows the world to be introduced to Lambert as he wants to be remembered as a pop-rock crooner.

Chasing that original high—whatever it was that made us happy, excited and somewhat naive when starting a new chapter—and then trying to find that high again years later, only to find out there is no way to attain that is the topic for the title track. This song placement for this jam is essential to understanding the album. Lambert starts off the album feeling down and unhappy in "Ghost Town," softly singing over the beat of a chorus that would make any EDM lover rejoice. The chorus is filled with synths and a whistles to contrast the somber verses. Then with the title track he tries to kick himself out of that rut and regain a new happiness. But he doesn’t achieve that just yet, in "Another Lonely Night" he isn’t fully recovered, but the synth filled up-tempo track will surely wake you up and make you snap your fingers along with lyrics such as “I would do anything to have you by my side”. This wake up call for Lambert continues on to the next track, "Underground" as he re-evaluates a relationship he has with someone (who could possibly be an ex boyfriend). This song lacks some subtle sultry in its delivery, but redeems itself through the continuation of a single emotion and story throughout the album.

At this point, listeners are halfway through the standard version of the album. "There I Said It" is when Lambert has gotten all of his biggest demons out and he is prepared to rock the night away and crank out some great tracks. Oh, but wait, one last demon. The media created this demon; "Rumors" featuring Tove Lo addresses the hoards of media that talk smack and make something out of nothing. The timbre in Lambert’s voice is extremely endearing. Both of their voices go in and out with perfect timing and wrap up listeners in a layer of sadness. The next song "Evil in the Eyes" is a good track that allows his voice to soar.

"Lucy" featuring Brian May carries over some of that Queen swag onto this album wth his guitars riffs. Listeners will find themselves bopping their heads to this ballad turned into rock jam session. The instinctive theatricality to his voice makes any instance where he sings huge no matter his volume or inflection. By track number 10, "The Light," he croons, “I still have a light and it’s burning still” as the beat pounds in the background that is a hybrid of funkadelic tunes and Madonna is the 80’s. This dance track will most likely become a club hit as well as an self-empowering anthem. Lambert sings about his quirks and imperfections, but he has the light within himself that nobody can turn off. The hallow sounding, but dance ready thumping synth from "Ghost Town" returns.

Three bonus tracks are on the deluxe version. "After Hours" has a pulsing, club ready beat that was taken from the 80’s and transplanted to 2015. "Shame" is unobstructed pop music where Lambert’s vocal acrobatic skills roam free. "These Boys" is somewhere between pop and rock and packs a lyrical punch that should be placed somewhere in the middle of the standard album version.

By the end of the album, Lambert realizes he won't ever achieve that original high and he will have to find a new high. But singing about his woes is his way of releasing all the hurt he holds within. Lambert uses all the wind his lungs will carry adding this magical touch when crafting personal songs with his collaborators. He keeps the tracks vague somewhere in the spectrum where listeners can grasp the concept and possibly feel the same emotions he does. What he lacks in sultry, he makes up for with his voice and doesn’t croon or wail on every song. But fans also wait for him to add a track or two where he reverts back to his old style or add an unexpected track to this project. Listeners can see the concept of this album after rocking out to the album in its entirety. "The Original High" sticks closely to Lambert’s style by teetering between glossy electro-pop and glam rock; except this time the styling’s of an EDM artist seamlessly meshes with the endlessly textured vocals Lambert showed off on American Idol in 2009.

Check out all things Adam Lambert at www.adamofficial.com.
Email ThisBlogThis!Share to TwitterShare to FacebookShare to Pinterest