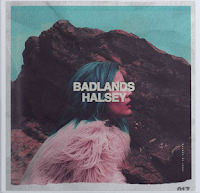 Halsey entered the music scene as Ashley Nicolette Frangipane (her legal name) in 2014 and posted cover songs on YouTube. That same year, she recorded an original song called "Ghost and gained the attention of Astralwerks record label. With that came her first EP, "Room 93" released in October 2014 and then she spent the next year touring as an opening act. In March 2015, he became the most talked about up and coming performer to hail from South by Southwest (SXSW) and by June 2015, she made the announcement she had begun to write material for her debut studio album. Which brings us to August 2015 and the release of "Badlands," the standard version.

According to an interview with Shelley Rome on iHeart Radio, the conceptual album focuses on the fictional dystopian society known as The Badlands. The city is surrounded by a desert wasteland, keeping the inhabitants of The Badlands captive. "Castle" is an immaculate way to begin the album by giving us a glimpse into life and her rise to fame. She uses a castle as a perfectly crafted metaphor for fame and the dark undertones set the tone for the entire album. "The Badlands" is not a place you want to end up. In "Hold Me Down," Halsey reveals that she is constantly struggling with this demons—a bad habit perhaps—that is going to hold her back. Lyrics like "My demons are begging me to open up my mouth" or "they fight me, vigorous and angry, watch them pounce" make you wonder what the bad habit is. "New Americana" is  mid-tempo anthem for our generation, "The Millennials." it is candid, but not ignorant about our generation and celebrates diversity of each generation. "Cigarettes and tiny liquor bottles, just what you'd expect inside her new Balenciaga. Vile romance, turned dreams into an empire. Self made success now she woes with Rockefellers." She is praising individualism, nonconformity. The next track is a dreary ballad that makes you sympathize with Halsey. "Drive" utilizes a simple emotion to hit a home run and the addition of male background vocals gives the track the extra touch to make it soar. This track offers a moment of solace. Halsey feels uncomfortable where she currently is, but is happy with the people she is with. So what gives? Well, who knows. The unstructured aspect of the production also helps convey the emotion.

"Roman Holiday" is a pop song that is dark and happy all at once. A Roman Holiday is "an occasion on which enjoyment or profit is derived from others' suffering or discomfort". This offers commentary on her as a songwriter and artist. She is going on a roman holiday each time she is singing or writing music. "Colors" is autobiographical or a well thought out sample of emotions. She wants someone and Halsey was not what they wanted. That person does not know how valued and important they are to Halsey. The track is relief (lyrically and sonically), because lets face it, listeners will need it. "Coming Down" is a vague track about relationships bringing out the worst and the best. Each verse sounds like a different situation is being described and it is wrapped up with sentiments based on her sacrifices.

In "Haunting," Halsey is reaching for hope. Her vocals are superb as she is getting the courage to give someone a second chance. The distorted vocals at the beginning paired with the rhythmic hallow drum beat are a catalyst for the track to emote hope and the possibility for a second chance. In "Control" you are haunted by everything from the hallow drum beat that sounds like a water drip to the haunting vocals. Lyrics include "I jumped at the slightest of sounds, and I couldn't stand the person inside me. I turned all the mirrors around." The track inspires you during one of those darker days that drains all the energy from your body. The song that you f**k to is "Young God." The song breathes and is not rushed in any way. Halsey sings about that feeling you have when you find "the one" and you feel invincible. These two tracks hit close and they energize listeners who feel defeated. "Ghost" makes you eternally sad as Halsey is trying to find love, and a lover willing to commit to a relationship. It is dream pop that includes electronic filled mid-tempo track with flawless vocals

Halsey is an artist who possesses a massive star, no superstar power, but does not create music that is bombastic. Her voice is delicate, effective, evocative, but still weighty and lacks stereotyping. Musical efforts most times lack a equal balance of personal lyrics and well produced sonic or teeter towards one and neglect the other. Halsey is a master of capturing your heart and your attention without causing commotion or creating redundant soulless pop music. The production of each track differs, but they all wrap together. "You were red and you liked me ‘cause I was blue. You touched me and suddenly I was a lilac sky—and you decided purple just wasn't for you" are lyrics that are not ones that just appear from thin air. Something about the lyrics is vague, but listeners can take whatever lesson(s) they wish from the concept album or individual tracks. That is the magic in the superstar we know as Halsey. You are never sure if she wrote a track or lyric base off personal experience or she is choosing an emotion and writing about it.

Check out all things Halsey at www.iamhalsey.com.
Email ThisBlogThis!Share to TwitterShare to FacebookShare to Pinterest