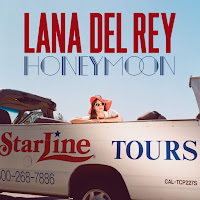 Lana Del Rey doesn't waste any time. Some artists use the cover art to make a statement and it isn't immediately understood. The album art for her third album, "Honeymoon" depicts an idle passenger, perhaps the femme fatale, in a parked convertible Hollywood tour mobile, locking eyes with something in front of her. A honeymoon is meant to be an escape from reality. A time to indulge in love, luxury and life away from the daily monotony. Love can't exist without loneliness. Lana Del Rey utilizes her honeymoon to sit back and soak in the longing she feels. She has this artful way of presenting her feelings through symbols of old Americana and still remains true to her cinematic sound that bears resemblance to classic Hollywood flicks. The greatest inspiration on this album is a noir film actress, Barbara Stanwyck. In the 1940s and 50s Barbara often played an ill manner femme fatale who uses cunning and sexuality to gain independence from an oppressive marriage.

The album begins with a subdued, ballad with an classic Hollywood flick string orchestration more specifically, during a sad scene) that leads into vocals from Lana as she continues being the eternally sad girl with a glamorous life who can never be cheered up. The title track isn't shy or embarrassed in any form, as is the entire album; she proudly states, "we both know it’s not fashionable to love me." The track quickly dismisses any indication that this honeymoon is going to be a joyful affair. "Music To Watch Boys To" is lush and coy as Lana creeps around for prospective dates. The following track begins with guitar notes being plucked. From there, "Terrance Loves You" falls deeply into this echo-y realm and Lana croons as you can hear the music ricochet off in the distance. Lana delivers lyrics such as "I'll let you be bad. I'll never dare change thee to what you are not. But I lost myself when I lost you," as she maintains strength in the moments after abandonment. She plays this submissive role, as she always does. But any fan of noir knows that is only bait perfectly placed by the femme fatale

The lonely guitar riffs kick off "God Knows I Tried" in a cinematic style that is lifted from that moment when two villains are having a stare off in an Western film. It tackles the darker side of celebrity. This track is the tipping point where the album dives deeply into the rage, violence, madness all fueled by bitterness. The twisted hazy pop on "High By The Beach" is an appropriate diss in any era as the femme fatale is singing from a different perspective, as the heartbreaker. "Freak" is an anthem (structured on stuttering cymbals) for those craving sex and their partner is also equally craving sex. The vocal layering still makes the song cinematic and slow rock at the same time.

I am unsure if the next track is a diss to the California stereotype or if it is aimed at someone specific. Lana's analogy is piercing in "Art Deco," as she sings "you're born to be seen" later adding "you're so art deco, out on the floor. Shining like gun metal, cold and unsure." It is not secret Lana is inspired by old Americana, in this track she moves beyond Kennedy kitsch and waving flags to spend her time digging a hole to something more specific. "Burnt Norton (Interlude)" is misplaced in this album. It should have been the first or second track. Lana takes T.S. Eliot's poem of the same name and sets it to music. "Religion" depicts a desperate Lana that wants to dedicate herself to a man, much in the same way someone would dedicate themselves to religion. How shocking (sense the sarcasm). Nonetheless, she still draws the listener into the track.

"Salvatore" is an Italian and jazz inspired homage to a time way, way, way in the past, but injected with bits of 21st century. The jazz notes become a perfect pillow for her vocals to land on. It is not too gaudy and absolutely not bombastic either. "The Blackest Day" is a six minute long monologue recalling the events after the emotional fallout after ending a relationship. Due to her perspective, the lyrical content isn't cliché, although the sentiment is. "24" is a revenge track produced with reverberating strings, brass and guitar notes. She is tired of your lying ass and she's calling you out in this epic track. "Swan Song" loops the album back to the message from "God Knows I Tried" as Lana croons about walking away from it (whatever it is to you) all leaving a wonderful legacy. The albums ends with a cover of Nina Simone's "Don't Let Me Be Misunderstood" which fits perfectly into the tapestry of Lana's longing.

Romanticized strings, sad ballroom ballad, Lana frosty crooning and that single tear drop when she tries to move on from a broken heart makes this album more than successful. "Honeymoon" is cinematic and the eternally sad girl will thankfully never produce music that is bubble gum pop. "Honeymoon" is filled with mid-tempo tracks that drift further into darkness and impeccably imitate the sound of classic Hollywood flicks with the added the flare of R&B and Jazz. She draws listeners in with false pretenses of a honeymoon and the femme fatale bats her eyelashes and keeps a smile on her face as she croons about longing, regret and spews a diss or two.

Check out all things Lana Del Rey at www.lanadelrey.com.
Email ThisBlogThis!Share to TwitterShare to FacebookShare to Pinterest