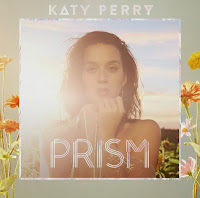 Katy Perry’s third album under Capitol Records, "Prism" hit shelves last week. The 13 songs (plus a bonus track) are a departure for Perry who is certainly ditching her cupcake bras, colored wigs and bubblegum pop jingles for a darker, 80’s inspired rock/pop sound. Critics rated it either on one end or the other. Using a grading scale of A-F, Elysa Gardner for USA Today gave her an A, saying "[her] lust for life itself [is] genuine and endearing enough," whereas, Jon Dolan for Rolling Stone gave Prism a C- calling her ballads “larded with Alanis-ian poesy she can’t pull off". "Spiritual" should be upgraded from bonus track to on the album. It is a drum and keyboard driven song colored with synth sounds. It is a beautifully written song and doesn’t have much overlay of lyrics with its minimal production.

Undoubtedly she is trying to subdue or even show off that inner Christian singer within her on "Spiritual;" something she shed, in order to chase pop stardom. Club lovers, look out, "Walking on Air" starts out with some eclectic piano notes and plummets into a club song that is perfectly crafted to layer Perry’s vocals to sooth the any club music lovers ears. "This Moment" doesn’t even sound like a Katy original (no harm done) but a cover of an 80’s track with its lack of vocal overlay.


Perhaps an ode or an after-the-fact love ballad to her ex-husband, Russell Brand—"Double Rainbow" the Sia and Greg Kurstin written throwback record revisits her experience with love. It is tinged with optimism and the song is so easy on the ears, it could go on for another minute and any listener wouldn’t mind. "By the Grace of God," both in its iHeartRadio Release party and album (some of the lyrics are wrong) versions are sad songs; however, the iHeartRadio version was stripped and kept the raw emotion spilling out of the song. The orchestration in the album version takes away much of the emotion and it suddenly becomes a song crafted to perfection, most likely utilizing auto-tune, except for a few spots. An acoustic version of this song would have truly showed off every color of Perry’s Prism.


"Love Me," is 80’s rock anthem where she proclaims "I want you to love me," that will without a doubt, inspire people to love themselves coupled with other lyrics such as, "I don’t negotiate with insecurities/ they are gunna have to talk the back seat." Who doesn’t love to see their favorite pop star exuding confidence and honestly singing about loving themselves? "This is How We Do" is a silly track that breaks the vibe created in the semi-serious album. It accomplishes the goal of Prism. Perry wanted to show of the "many sides of Katy," as she said to locating link.


“International Smile” is a song that is the farthest from her bubblegum pop, in comparison to "Birthday," the third track on the album. "Birthday" is a cool song that covers such a sexualized thought, perhaps divulging into the unused lyrics from "Teenage Dream," off her last album of the same name—or could even be a continuation of the story. Her voice teeters from falsetto to her normal voice smoothly; this synth-tinged song is a perfect nod to her bubblegum pop days. "Ghost" is another synth filled track; it picks up where "Wide Awake" left off, continuing to rehash details of her marriage to Brand. Once again in "Unconditionally," Perry leans towards a synth driven song, this time, making it a ballad that is very smoothly constructed with drums; the constant melodic drip sound steers the listener through the song and her voice in layered with such beauty and simplicity. The link is something spectacular, for just a lyric video, you should check out.


The first single, "Roar," overplayed, over advertised, over it. Sorry Katy, it’s catchy and all that fun stuff—but her performance on the 2013 MTV Video Music Awards (VMA’S) ruined it (for me at least). It’s an inspirational track that once again accomplishes the goal of Prism. From kitschy, synth & 80’s throwback to silly, sexual and dare-I-say-it, plunging into & out of depression and sadness, Perry shows off all the sides of her prism. Compared to her last album, Teenage Dream, this album takes an adult stance on the songwriting process—without bashing Perry for her other musical efforts, this album is definitely a welcomed change. Fans want to see an evolution in songwriting, sound and image. After this album, she should feel free to mix the sounds from "Prism" and first two albums, "One of the Boys," "Teenage Dream" and maybe even a taste of the Christian singer side of Katy. In 2014, a U.S. and Canada tour is planned, but the dates are not confirmed yet. To read more reviews, visit idolator.com, where there is a list of reviews.

For all things Katy Perry at www.katyperry.com.
Email ThisBlogThis!Share to TwitterShare to FacebookShare to Pinterest