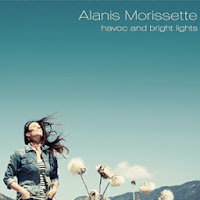 Singer-songwriter Alanis Morrissette's eighth album, "havoc and bright lights" (intentionally stylized in lower case) features a softer, hippy side of her, rarely pulling out her harder rock and edgier side. Her eighth studio album stays afloat as she keeps on consistently producing vocally appeasing songs.

The first track, "Guardian" consists of a strong vocal and killer chorus, an breezy arrangement of soft rock guitar notes; successfully creating a vessel for an open dialogue about acceptance. A roughly three minute long rant, in musical form, that blasts misogyny is the albums second track, "Woman Down". Two songs later, she changes her ethereal demeanor yet again, in "Celebrity," a song attacking the fame seeking, twenty something's that yield for stardom.


"Celebrity" can be given kudos for its catchy lyrical arrangement and industrial/ Middle Eastern sound as Morrissette sings, "Never wondered who's pulling strings above me/ Cause I'm aware of wheels, heels and vintage Gucci/ I'm on my twentieth round of Vitamin V/ And I'll cut my weight in two if you'll have me." However, Both of these songs divert attention from the new, softer Alanis. Maybe she even did it as a marketing ploy to keep those angsty Alanis lovers and draw in a new fan base. "Empathy" is a soft-rock piano ballad that is simply that. It appears to be a love letter (how ironic) to her fans for sticking by her. From there, the album seems to plunge into oblivion; it neither sinks nor swims, with the track, "Win and Win" redeeming itself with a Middle Eastern flare, soft and soothing vocals, as she discusses her relationship with her husband, SoulEye (he later goes on to reciprocate his love, by making cameo on a track).

Bonus Tracks (offered on the Target version): "Big Sur," is arranged with caution and shows off Alanis' voice and nothing more. "Guru" discuss' religion and is pop/Eastern inspired, as most of the album is; a rap section smack in the middle performed by SoulEye, breaks the formula used for every song on the album. (Perhaps this is even a statement on Morrissette's behalf. The only featured artist on the album—and it's her husband). "Permission" is a mellow guitar and drum led ballad in which Morrissette plainly spills her feelings out one last time. The bonus tracks are simply self-indulgent, allowing Morrissette to continue discussing her religion and the life she leads as a mother.

After listening to her CD, I can only come to one conclusion: This should have been an EP (using the same name) which includes "Guardian," "Celebrity," "Empathy," "Win and Win," and "Guru" to satisfy her lust in proclaiming her religious views throughout the album—it would have truly been havoc then, turning her idea into a conceptual album.

Her vulnerability is clear—upholding a strong opinion, sprinkled with poetic tendencies, as she sifts through the emotions humans go through, making the album inspiring. However, life isn't always fair, and ironically so is the content of this album: mediocre at best. Now that her life seems to be happy, as she is thrust into motherhood, her "Jagged Little Pill" days seem to be way, way behind her, she has hung up her angst and traded it for spirituality & parenthood. Not that her embracing a softer side of herself is a bad thing. Perhaps she should have waited a few years, to gather her woes and wallow in the challenges and beauties of being a wife/mother and any obstacles along the way. Let's embrace it, the new, softer Alanis is here to stay and she isn't worried about creating music that is akin to the Alanis we've all grown to love.

Check out all things Alanis Morrissette at www.alanis.com.
Email ThisBlogThis!Share to TwitterShare to FacebookShare to Pinterest