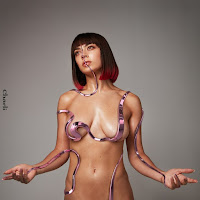 "Charli" is Charli XCX's third full length studio release, but fifth album. The entire album can be summarized in 3 words: Sci-Fi, gothic, futurism. The album bounces between ballads (tracks like "Warm" or "White Mercedes") and Sci-Fi gothic futurism (tracks like "Shake It") bops. It uses an adventurous production style, but it's not unpleasant either. It merges pop music with Sci-Fi futurism vibe effortlessly with thick, but not heavy echoing vocals and metallic sounding instrumentals. The beat never swallows Charli or her various features vocals. Her music continues to love pop music but still she revolts against pop music. The juxtaposition of the 2 makes this album float, instead of sinking. There are many features, but they are all strategic and it doesn't overwhelm listeners.


The first track "Next Level Charli" is a prologue for the album (perhaps intentionally?) with its mix of this metallic beat and quick (and catchy) lyrics that sets the scene for the rest of the album. She wastes no time previewing what is to come. Her taste in collaborators is ripped right out of the top 40 of pop playlist. It keeps things fresh and contributes to the success of this album. She doesn't hold out on listeners only to reveal her bag of tricks later in the album - the second track on the album is "Gone" and features Christine and the Queens. The track quickly resorts back to standard synth-pop which is how the album reconciles between the Sci-Fi futurism and pure pop sounds. The shallow beat lets the lyrics settle in and the topic is very relatable as she recounts having an anxiety attack and feeling alone in the crowd.

Although it's mindless and fun pop music, "1999" featuring Troye Sivan is a standout track. It majestically blends nostalgic (lyrical content) with futurism (beat) to create the epicenter of true pop music - a song that seems hallow on the surface, but has actual meaning. Charli and Troye are pay homage to "those days" that were so much better when they were playing air guitar or watching "All That" or singing to "...Baby One More Time" by Britney Spears. You've got to dig back into the future in order to propel yourself into the future that the year hasn't even come yet. In contrast to "1999," a track later in the album, "2099" trades the smooth and glossy electro-pop production of the early 2000's for this Sci-Fi futuristic punchy sonic vocal and musical production.

"Click" (features Kim Petras and Tommy Cash) is bombastic and the filler track each album needs. This is Charli, Kim, and Tommy's chance to brag and be over the top. "Warm" features HAIM and the tropical electro-synth head bopping track blends Charli's pop sensibility with HAIM's pop-rock bass guitar, keyboard, and vocal stylings. It doesn't sound like a song by Charli XCX with HAIM plopped right in the middle. "I Blame It on your Love" is a pure pop offering that melds the 2 artists without one artist carrying more weight than the other. We've all heard those type of songs and thought why did they jump on this track? It services itself for Lizzo and Charli to promote each other since they share a record label.

"White Mercedes" is a ballad where she "I don't deserve you" slips out of her mouth with sincerity as she talks about a relationship that is like a gas guzzling vehicle. It burns gas until there is nothing left, you hate that it does that, but you still drive it. Does "Shake It" even have any vocals from Charli XCX? It features Big Freedia, CupkcakKe, Brooke Candy, and Pabllo Vittar. It sounds like 4 different tracks about the same topic with interludes in between. It throws caution to the wind. What artist is so confident in a track they put on an album that they don't even have vocals on it?

The album production is very frosty and metallic, but never repetitive. Each track provides something new for our ears to enjoy. Charlie XCX, her producers, and the features on this album tell a good story and borrows from all corners of the world of music production. It starts in 1999 and the second last song concludes the story, with the last song being her blast off into the future. The innovative production smears and distorts vocals and instrumentals to create something familiar yet so Sci-Fi futuristic.

Check out all things Charli XCX at Facebook.com/charlixcxmusic on Instagram.com/charli_xcx/. At the time of this article, her website was not functional.
Email ThisBlogThis!Share to TwitterShare to FacebookShare to Pinterest