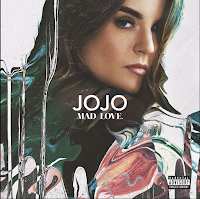 JoJo is back after more than a decade. After a lengthy legal battle with her former record label, Blackground Records, she is back. Her professional career was derailed by record label drama. She isn't the first or the last to have it happen. But the length of time JoJo wasn't producing music hasn't opened the door for her to disappear into obscurity. During this time where she was in limbo, JoJo released one-off singles and mixtapes. Nothing was going to stop this artist from doing what she loves and her fans never left her side. In an interview with Vulture, she said, "I still have people who want to hear me, which is a pretty unique position to be in after this journey." She has writing credit on every track. "Mad Love." is a continuation of what JoJo would have been as an artist had she not been derailed.

From an evolution perspective, she was granted time to grow as an artist sonically and experiment, without releasing music that could flop. JoJo is leaping back on a train that she laid rails for years ago. However, this album does lack cohesion. JoJo has much to say, but the theme of no holding back runs rampant across the genre jumping tracks. She is also driven by self-empowerment and self-awareness in each track.

"Mad Love." (the title of the album and each track are stylized with a period on the end) starts with "Music.," a piano and vocal drive ballad chronicling her struggle in the music industry and is an ode to her father who passed away last year. The bare vocals heighten the message of the song. We have all encountered obstacles and encountered death, JoJo uses this opportunity to pull at our heartstrings in this autobiographical track. The love note to music itself isn't hallow, it will give you chills and she doesn't over sing, per the usual. If you aren't brought to the brink of tears with lyrics like, "“Went on the road to make my daddy proud. But I lost him and then I sang to the crowd. My only hope is that he’s looking down thinking, ‘Oh my God, my daughter’s doing it now,’” you have no soul. "I Can Only." features Alessia Cara and falls in the realm between anthem and ballad. Both ladies crank out vocals that are radio ready. "Fuck Apologies." features Wiz Khalifa "FAB." stands for fake ass b*****s and warrants the inclusion of a rapper feature a la Remy Ma. The two ladies take this opportunity to diss fake ass b*****s. The song is ridiculous, but necessary. It happens in every stage of life, snakes come into your life and you must make sure the venom they dig into your body is sucked out rapidly.

The title track, "Mad Love." is an R&B jam that saunters in what made her famous. JoJo is able to run the full range in her repertoire, with care not to over-sing. This track also kicks off a series of tracks where she is sexually liberating herself. The R&B finger snaps from the last track transfer over to "Vibe." This track paints a true picture of what activities someone of her age would be engaging in. JoJo is digging a guy and she doesn't want him to kill her vibe. In "Honest.," she is just that and will not subject herself to any standards, unless they are set by herself. This track dissects a relationship that brings nothing positive to her life. Her angelic voice soars high as she scoffs in the face of those who don't like her prerogative. This track should have been the first track on this album as an introduction to her unabashed truth. Someone has JoJo a guy all sorts of twisted in "Like This." and she is going to use that to her advantage. The slick production creates an ambiance that speaks for itself. Edibles." begins to wrap up the story and "High Heels." ends the chunk of songs about sexual liberation. JoJo is done with this guy messing with her feelings and has her stuff packed and ready to go. She plans on coming out on top and refuses to be played. The end of the standard version is "I Am.," a track that mirrors the production in the first track—a perfect book end—and a wonderful wrap up. She proclaims unobstructed self-love for her as a human and artist.

The deluxe version includes 4 tracks. "Clovers" The song gives her fans (especially the ones who shed adolescence alongside her) the language to describe the transition into adulthood. However, the production makes you dizzy and creates a impending headache. Perhaps this is a metaphorical choice? JoJo apologizes for being reckless with someone's heart in "Reckless." with a standard R&B slow track beat that is a vessel for her vocals. "Good Thing." is one step away from being a club ready banger. It shows off her falsetto and was birthed out of the love for late 80's/ early 90's club music. Under the masquerade of "Rise Up.," JoJo is able to address her legal woes with Blackground Records and make it sound like a generic anthem for the masses at the same time.

Self-empowerment and self liberation allow JoJo to become selfless. The autobiographical content doesn't overwhelm listeners. Overexposure and PR nightmares are currently haunting artists that came out during her era, she is blessed and isn't grasping for something that has long disappeared. Her vocals are consistently produced to near perfection. She does not over sing and never allows the beats to swallow her voice. Although the tracks genre hop, JoJo isn't hopping at free will, her vocals steer the train, because this artist is not allowing anything to derail her artistic efforts. It's sexy, savvy, sexual and smart. Whether your are a JoJo longtime fan or you just discovered her, you will like Mad Love. from beginning to end.

Check out all things Jojo at www.iamjojoofficial.com.
Email ThisBlogThis!Share to TwitterShare to FacebookShare to Pinterest