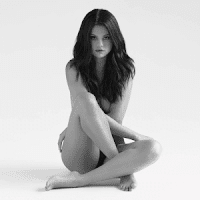 Selena Gomez steps out of Disney teen popstar into Selena, the grown ass woman with "Revival." This October 2015 release is Gomez's second studio album and doesn't disappoint, neither does it excite. This album allows her to gap the bridge between her Disney days and the new Selena. This compilation of tracks is impressive. (You can hate me for saying this, but...) The formula for this album seems eerily like Justin Bieber's Purpose, released three months after her album. The introspective, but vague album about heartbreak and all the emotions encompassing it. What differentiates the two albums is Gomez isn't oozing heartbreak in a sappy way each track.

Each track shows off a new sound, but never strays too far away, remaining cohesively diverse. She is that self-aware that she felt the need for a revival...or perhaps that is a hokey marketing ploy. I hope it is not the later. Her lush vocals and low key vibe makes this album easy to pick apart, adding the songs to each playlist you've created over the years. The album starts off with a track titled after the album. Typically, I don't like when artists do that and then they cram all the radio hits after that. In this case, "Revival' as an open track is appropriate. Sonically, it is experimental, pairing drums and synths with string instruments. The 80's inspired "Kill Em with Kindess" is a great take on giving the media and anyone else a middle finger. Well crafted gentle reminders like "Your lies are bullets. Your mouth's a gun and no war in anger was ever won." make this song stay afloat. "Hands to Myself" is going to be overplayed by the radio and we will never get tired of it. The song's message is sexual in nature, but not super sexual and the whisper-singing works to her advantage. Her voice is silvery and enticing. This enticing theme carries over to "Same Old Love" where she is venting about crappy, same old, plain Jane love. She clearly wants something different. The song is catchy, despite her static vocals.

"Sober" feels like a direct response about her relationship with Bieber. The on and off relationship is certainly a trove of information. The orchestration is great pop music and it's packed with relatable jabs about any unreliable relationship. The metaphor of being sober is not generic, but the song gave me the feels. "Good for You" can't be anything else but Gomez singing to herself to keep her confidence up. Don't we all do that? It is a finger snapping, sensual and airy mid-tempo jam. Yet something lingers in the song that it is her wanting to look good for a dude and the verse by A$AP Rocky confirms that.

"Camouflage" takes the album to a really sad place as Gomez is very introspective about an old flame. This piano ballad gives listeners the goosebumps. The production allows the song to simmer without overlaying many vocals and whatnot. This song made me (and will inevitably make others) think about an old flame. Synth pop tracks are the new normal, and while I appreciate it "Me & the Rhythm" is static and the vocals sound phoned in. Songs should have an up and down, regardless of message. "Survivors" is an anthemic jam that's club ready, her vocals come across as subdued and not at full force. The message is great—this song with be remixed to death and so will "Body Heat," which is an attempt at a Latin flavored jam. The song is sexual and her vocals are superb. The standard version of the album ends with "Rise," This slow ballad is light and very celebratory, a perfect bookend to the opening track. The sing-talk moment towards the end brings a smile to anyone who is down.

The deluxe version has three extra tracks: "Me and My Girls" is a Latin flavored club banger in which Gomez sings about female empowerment; with lyrics like "I’m going home with who I came with and who I came with is not you.” listeners can't help but appreciate the song for the message of self-worth before lust. Maybe she doesn't want a random hookup due to the ode to a lover in "Nobody?" This ballad is catchy and her airy vocals entice the listener. It certainly had me bopping my head and isn't sad at all. It is a realization that nothing will last forever, even the best lover; and in all its melancholy joy, "Perfect" our heart break for Gomez as she sings about betrayal (presumably a continuation of the story from "Nobody"). The harp sounds and lyrics make the track goosebump inducing. Anyone who decides to play this track will be smacked in the face with memories of a situation they were betrayed. "Me and My Girls" is not my favorite track, but paired with the other two bonus tracks, it makes sense. On the other hand, "Nobody" and ""Perfect" do not deserve deluxe version treatment.

All of her vocal performances are soothing to the ear. She is soft spoken in her vocals and song choice, but always manages to give us emotion(s). She is not a belter or a hype singer and doesn't try to be something she isn't, nor does she want to venture. "Revival" is more vulnerable and personal than sexualized; she doesn't include a track on the album to prove that she is breaking free from her Disney image. On the title track Gomez asks, “Who knows what I’ll become?” What is the answer: it turns out, is pretty much what it’s always been—she’ll become whoever pop needs her to be. She is a chameleon and loves showing off her young adult, but cocky confidence. She doesn't have to be vulgar or make outlandish statements, she is happily herself and refuses to make music she doesn't want.

Check out all things Selena Gomez at www.selenagomez.com.
Email ThisBlogThis!Share to TwitterShare to FacebookShare to Pinterest