Album Review: This is Acting [4/5 stars] 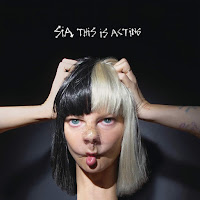 With her seventh studio album, "This is Acting," Sia captivates fans and continues to garner new fans. The concept of this album is simple: the singer-songwriter had a pile of songs that were written for other artists, but they did not want them for a variety of reasons. But don't think these are bad songs. They are just songs that Sia is emotionally detached from because she gets inside the mind and skin of the artist the track is for. Sia ends up grabbing more attention, as she strives for privacy. During the tour for her fifth studio album, she made it clear that fame was giving her anxiety, mentioning stage fright and a demand for privacy as the reason for her indefinite break from being an artist. Her focus shifted to cranking out songs for others well known artists such as Beyonce, Rihanna, Rita Ora, Katy Perry, Jessie J and Kelly Clarkson. With her sixth studio album "1,000 Forms of Fear" she conquered her fear and found a fix for some of the anxiety she had surround fame, making her one of the most celebrated artists of 2014-2015.

This take on an album is very interesting; as a songwriter, one expects to have duds or songs that end up unused—Sia decided to embrace that by taking those songs, giving them her twist and releasing them on an album, ironically called "This is Acting." She is using her fear of fame to create art. "Bird Set Free" is a simple track—as most of her songs are—with a message of hope for anyone who feels like a caged bird. The production allows her voice to become shrill without piercing your ears. "Alive" has this soft rock, drum led beat and just when you think there is going to be a roaring chorus, there isn't. This was written with and for Adele; Sia shows off her talent in twisting words to fit a song in this track. The rasp and hiccuping in her voice draws listeners further into Sia's world. In "One Million Bullets" she trades the rasp in her voice for subdued, smoother vocals and a great orchestration of drum, guitar and piano notes as she promises complete fidelity to her partner. This is the only track she wrote solely for her use.

"Move Your Body" was obviously written for Rihanna or Shakira. You can hear it in the percussion led beat and they way she beautifully contorts her vocals to sound like the singer. The somewhat bombastic, but honest song about pedigree and current status in the world makes you wonder. Who was "Unstoppable" meant for? Who inspired the song? Was this a figment of Sia's imagination? Was this inspired by the thought of fame hungry artists? "Cheap Thrills" reverses the sentiment from fame hungry to fame rejecting gal in this head bobbing ode. The echo of a choir in the chorus and this weird squealing voice add flavor to a song that could have easily gone into cliche territory. Her voice is effervescent when Sia sings a track originally meant for Rihanna. "Move Your Body" and "Cheap Thrills" attempt to lighten the load from the heavier tracks on the album.

"Reaper" is built with a clap and beeping beat, literally. It sounds like a basic drum is being drive my clapping sounds and a random beeping appears, fading in and out as necessary. This song feels and sounds like it was written for Sia and not Rihanna, who has rejected several tracks. "House on Fire" features a synth-y, Christmas-like arrangement of keyboard sounds intensifies the reverb on Sia's vocals. For a serious song, the sound is too cheery as she proclaims, "Baby I'm a house on fire. I want to keep burning." And then "Footprints" draws us back in as she returns to a somber tone. It is anchored by her vocals and utilizing various string instruments all arranged with a 90's sensibility, that fits in the music world of 2015. Whereas the orchestration of music in "Sweet Design" gives listener's a headache and Sia's vocals are buried under all this noise.

"Broken Glass" has a Middle Eastern flare to the beat at the beginning, but it soon delves into a drum led track where her vocals soar high and the vocal layering is impeccable. This song can easily be inserted into any episode of Grey's Anatomy or romantic flick to intensify that super serious moment. "Space Between" is haunting both in vocals and sound. The chords quiver and reverb over these sad vocals.

She pours her all into the tracks, despite the emotional detachment because they were originally written for other artists. She clutches your heart and helps a hurting psyche find solace. The hiccups and cracking in her voice make each track big, but not hallow. Sia will never change her cinematic ways of creating music. She has promised to keep coming out with pop albums, but what does that mean? We will never know, because the new standard for pop music is no standard. This album is superb, but I am left with one lingering question: which artist were these songs meant for?

Check out all things Sia at www.siamusic.net/tour.
Email ThisBlogThis!Share to TwitterShare to FacebookShare to Pinterest