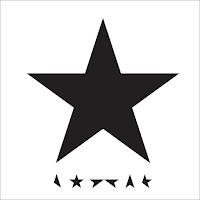 During his nearly 5 decades in the music industry, David Bowie never failed to impress. His style was ever-changing, along with his music. He was an innovator and will continue to influence people for all eternity. Sadly, two days after the release of his 25th album (and his birthday), on January 10, 2016, Bowie left earth for other ventures. His curtain call: "Blackstar." The album is riddled with lyrics written by a man who knew his death would cause the world to weep and Bowie wanted to go out with a bang. Unbeknownst to the public, Bowie had spent the last 18 months of his life (not so) silently suffering from cancer. His lyrical theme of violence and doom remain in his death march and so does Bowie's mystery. His introspective demeanor on this album pairs well with his usually style of whimsy. If you stop for a moment, even the album cover is whimsical and mysterious. The smaller stars spell out B-O-W-I-E. The album is art rock and experimental, with influences from many other styles, per the usual.

The first track, titled after the album is an experimental sounding track tinged with a rock sound. Bowie's voice is warped and hauntingly calm in the nearly 10 minute track. The sound is bold, dense and lush, just when you think it can't get any better, it does with a sprinkle of pop-electronica. "Blackstar" ends off with the drum and bass/violins that led the track as Bowie's voice fades out, indicating the conclusion of a song. Or so I thought—I went to see the name of the next track on my phone and the song was only halfway through. The fade out was a segway to the other half of the track.

"Tis a Pity She Was a Whore" features sadomasochist lyrics, such as, "Man, she punched me like a dude." The teetering from soft to hard rock in "Sue (Or a Season of Crime)" entices the listener. Both tracks are-orchestrated versions of songs released in 2014. "Lazarus" was written by Bowie for his off-broadway show of the same name. This track is the man, the legend, the innovator writing about his death, soaking it with dread and backing it with a warbled jazz orchestration.

"Girl Loves Me" immediately has this pop-rock sensibility, but Bowie's warped vocals bring it back to experimental. It was written using Nadsat (the language used in Anthony Burgess' A Clockwork Orange) and Polari (a slang language from gay clubs in 70s London). He vocal is calm, but the song is hectic with thoughts. The echo of Bowie's vocal is pair perfectly with the loose sounds of drums and strings. "Dollar Days" is a radio ready ballad is a self referential track where Bowie contemplates his regrets and successes and acknowledges the current state of the music industry in one breath. "I Can't Give Everything Away" starts with a harmonica that makes his finale a lasting stamp on your heart with this beautiful farewell. Bowie is discussing moving on and illustrates this by orchestrating a chilling collision of rock and jazz with a send off meant for the last song of a concert.


The 40 minute, 7 track album is hypnotic, as Bowie was his entire life. Absolutely brilliant! Shedding persona's faster than the cloths can be made for them. His experimental curtain call skips between electronica, pop, art rock and jazz with this ever present cinematic style making the album stellar. He genre-bends music to its breaking point as usual and evocatively tells the world about his last few months on earth. Such a public declaration via music for a private person is inspirational and not-so-groundbreaking, but then his abrupt death gave it new meaning. Almost as if Bowie planned for it to occur this way. Bowie has died and reincarnated himself, but this time, he is gone...and gone for good. What a poignant way for an enigma to bid the world farewell. Bravo, Bowie! Bravo!

Check out all things David Bowie at http://www.davidbowie.com/.
Email ThisBlogThis!Share to TwitterShare to FacebookShare to Pinterest