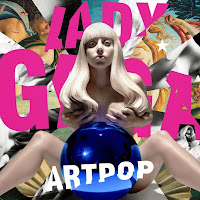 "The Fame," is about ambition, "The Fame Monster" is about her inner demons, Born This Way is about acceptance on a bigger level and "ARTPOP," Lady Gaga’s latest pop offering is a confession of a pop artist. Lately, she has been stripping away the layers, wearing less make-up and wigs, consistently toning it down, but by no means is she letting her fashion influence deteriorate. Upon first listen, the “art” part of "ARTPOP" could be seen as missing, other than a few name dropping lyrics—with an overdose of “POP”. But it’s not! The art is in her pop music, listeners have to dig for it. On a basic level, it resides within her presentation of a live performance. Gaga doesn’t drop an album without any thought.

Despite the sonically appeasing tracks on "ARTPOP," the title track should function as an intro track or even a prelude to the album. Typical of pop, this formulaic practice to make the title track, the first is cliché—in this instance, the message of this song will perfectly segway into “Aura” and the entire album. Gaga buried it eight tracks in. On the other hand: “ARTPOP” can be seen as a quote-on-quote explanation of her decisions this far in the album. Nonetheless, it is still a strong track and provides the futuristic electro beat and ethereal vocals that draws listeners further into Gaga’s wonderland.

The actual first song on the album, “Aura,” vaguely references religion with an intro tells a beautiful story about a woman who wears a veil to protect her face. Is she uses religion to make a point about religion? Or is she using religion to make a point about her life—or both? She sings in the chorus, “Do you want to peek underneath the covers. Do you wanna see the girl who lives behind the aura.” It starts off with a hypnotic gothic arrangement reminiscent of a slide guitar, lute, zither or even a combo of all three. Nevertheless, it is all overlaid with an ominous, goose-bump inducing intro by Gaga. It becomes unhinged in a blink and leads to a club banger with its thumping synth. “Venus,” is inspired by her recent fascination with Greek Goddesses; she paints herself as a “seashell bikini” clad Goddess by Botticelli. The stand out lyric from this track is a tied between two: “Have an oyster baby, it aprod-isy. Act sleazy. Venus.” and “Uranus! Don’t you know my ass is famous?”

“G.U.Y” is packed to the brim with symbolism. In “G.U.Y,” which stands for Girl Under You, Gaga sings about being in charge and dominate in regards to her music career, but wishes to be submissive at home. “Sexxx Dreams” is the first time on this album she wanders into R&B land, but it still is synth and drum heavy. The song functions as a B side of “Pokerface” off of her 2008 album, The Fame. For those who don’t know, “Pokerface” is a song which Gaga discusses her bisexuality. In “Sexxx Dreams,” she is no longer struggling with her sexuality, she is proclaiming it proudly. But don’t worry, the next song “Jewels N’ Drugs” featuring T.I., Too $hort and Twista packs enough R&B to satisfy the ears. It’s candy for the pop lovers as she confesses, “I don’t want your jewels, I want your drugs”. Yet something seems off in this song—maybe the collaborators—or even the song itself.

She then tames it down in “MANiCURE,” a useless song it seems upon first listen. The meaning lies within the interpretation of the song and understanding the wordplay—it is a confession—about wanting a cure from men. In the bridge she yells "Heal me cause I'm addicted to love" and during the chorus she sounds more monotone and can only speak in rambles. “Do What U Want” is the perfect marriage of pop and R&B—Gaga slithers through the song, using that sweet spot in her vocal range as R. Kelly drops a wicked cameo on this throwback track. The song is Gaga at her finest—spewing out pop music and stuffing it with significance and symbolism. “You can’t stop my voice, cause you don’t own my life. But do what you want with my body.” Her heart, mind, voice, and life are hers, the media can do whatever they want with her body, as they “print some s**t, that makes her wanna scream”.

“Swine,” is a befitting deranged EDM track in which she confesses, “You’re just a pig inside a human body.” It was Gaga’s form of therapy during a time when she felt worthless and struggled to find her place as an artist. It can be assumed that this song is an f**k you to Perez Hilton after he viciously turned on her. Or at least he is one of the targets of the songs message. During the iTunes Festival this past summer, Gaga shared with the audience that “in order to get here I had to climb through a lot of swine.” “Donatella” is well, an anthem about Donatella Versace—spewing out seemingly mundane details of a socialite and heir to Versace. It is too catchy, witty, the perfect amount of respectful satire and certainly functions are perfect product placement… especially when it’s announced she will be the face of Versace ad campaigns—marrying art and pop. “Fashion!” is Gaga’s way of confessing her fashion influence as he nods back to her “Marry The Night” days (or nights), “Display your diamonds and pearls in light. Fashion! Married to the night. I own the world, we own the world”.

The next three songs (“Mary Jane Holland,” “Dope” and “Gypsy”) function as a trio of songs that work closely together they could spawn their own EP. “Mary Jane Holland,” is a confession, in a way. Gaga reveals what she likes to do/ liked to do on her free time on a stop in Holland, taking time out to smoke marijuana (street name Mary Jane) and discussing the cost of their expensive truffles. It is like those cheesy commercials that try to convince you to visit a place, from the local tourism board—except the song isn’t cheesy. The rightfully lonely ballad “Dope,” strikes every chord, musically and in the heart as she purposely throws her voice to evoke an emotion she usually saves for one song in every album. It is an ode to her drug using days, by the end of the song, she has fallen apart and her vocals do too creating a dramatic and heartwarming epiphany of an ending reminiscent of a Broadway-esque track as she realizes, “I need you more than dope”. This song could be one of her most candid and raw confessions to date, exploring the lower register of her voice. The precursor to the album finale, “Gypsy” is an up tempo song, arranged with a piano/synth/guitar and drum led beat. This confession riffs off her “Dope” revelation, now she torn between love and traveling the world performing. By the end of the song, a compromise is reached and he chooses to travel with Gaga around the world.

Gaga’s finale, “Applause,” is radio ready as she stops for a one last moment and confesses her appreciation for the applause fans offer her every time she has provoked listeners to think beyond the superficiality of pop music. This song has two purposes: (1) as a thank you to her fans for appreciating her music, sticking by her side and cherishing her influence as an artist and (2) as a curtain call—she is saying, “I’ve given you a piece of me, I hope you like it…and continue to applaud me as you have been”. ARTPOP teeters between R&B, pop and EDM music. You either like it, or you don’t. That’s just the way Gaga likes it. “Well, that's your opinion, isn't it? And I'm not about to waste my time trying to change it.” The slick production of this album shows her diversity and the inspiration she can extrapolate from anything.

For all things Lady Gaga visit www.ladygaga.com.
* It also appears as an in print version here.
Email ThisBlogThis!Share to TwitterShare to FacebookShare to Pinterest