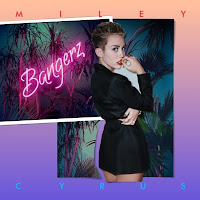 Miley Cyrus, now free of the Disney machine and her image as Hannah Montana, came out with her fourth studio album, "Bangerz" this weekend. This is the debut of the real Miley—the rap-loving, almost profane embracing, often self-mocking, cheeky Miley Cyrus. She can finally sing about what she wants to and work with whatever collaborators she wants to. At first I was annoyed by the songs, but after giving it another listen, they are clever and never lazy. She goes from a female rebel to a scorned female. The album consists of many repetitive themes, but each song stands on its own as she sings each song with zero doubt and an abundance of confidence. Many artists feel the need to publicly display their sexuality once they turn 20, but Miley is showing off her sexuality because Cyrus wants to and she has the personality to back up the hefty bangerz. Although it is filled with party bangerz, it also succeeds in functioning as an empowerment album as well.


"Adore You" (my favorite) is a not too provocative ballad to express the love you have for a significant other. This pop ballad is a great album opener and stellar first impression as listeners slowly unravel the new Miley. It shows off her singing skills without having the music swallow her whole. "We Can't Stop" is a great sing-a-long track and wisely released in June, making it an instant summer jam. To contrast the subdued intro, she places the cheeky pop track "SMS (Bangerz)" next which features Britney Spears and shows off Cyrus' love for banging beats and layered vocals. It is knowingly plagued with a clumsy and gimmicky pop production that tries a bit too hard.  "4x4" is country-tinged mash-up with Nelly that has this weird affect on listeners. It sounds awful with its rhythmic hoedown arrangement about a "female rebel" (aka Miley), but after the first 30 seconds you're hooked and snapping your fingers as you join the hoedown.

"My Darlin'" is and odd love song that consists of pounding and blinking synths, oddly soothing crooning, some drum accompaniment. Both Cyrus and Future's vocals are purposefully suffocated by the beat. There is this back-and-forth of booming songs contrasted by songs with a minimalist production. The overplayed lyrically mature "Wrecking Ball" is next and as we all know it is (although unconfirmed) about her ex-fiance, Liam Hemsworth. Just to tally up the count so far, we have: 4 love songs, 1 empowerment anthem and whatever you want to categorize "SMS (Bangerz)" as and we are only 6 songs into the 13 track deluxe version of the album.

"Love, Money, Party," is an honest song surrounded by a grimy house beat featuring Big Sean. Cyrus is rapping quick bars about wanting, uh, well, love, money and partying. "#GetItRight" is a standout track that is relatable to anyone who is in thirsty for sex with his/her significant other. Cyrus is fed up with the lack of sex during this rendezvous and she is singing to you about her woes. It never relies on super sexual imagery, instead it alludes to typical thoughts on horned person would have. "Drive" enables Cyrus' voice to shine, with this drum and synth led beat that could make you dizzy if you're not careful of the volume you play it at. "FU" is the diss song everyone wishes they wrote about his/her ex that cheated on them. It is comprised of lyrics such as, "then I accidentally saw a few things in your cell. I even LOL'd, man, I should've known". It's very entertaining and captivating as her voice wavers in and out while she wails "Only two, ooh ooh letters to choose. One of them is F and the other one's U. SMH, I'm pressing send on you" over the reverberating wobbly piano music as she furiously unloads a ton of sass in one text, er, I mean, song.

"Do My Thang" is combination of crazy lines fearlessly sung by Cyrus—it will get stuck in your head and you will find inevitably find yourself randomly repeating one of the many absurd rhymes. "Maybe You're Right" is introspective and relies on the subdued orchestration and echoing chorus to haunt listeners to their core as she belts out the lyrics. This is definitely an autobiographical song and oozes much maturity. The last song on the standard version is a thumping synth led song that continues the thoughts from the previous song.

Bonus Tracks: "Rooting of My Baby" ditches the booming bass for a softer drum and guitar led track with this back and forth layering of Cyrus' voice that should have been placed somewhere on the standard version as a reprieve from the heavy beats. "On My Own" is a disco/synth creation that completes the slew of breakup/screw men songs on the album. The message of this track in cliche, but true—take care of yourself first. "Hands in the Air" features Ludacris feels like a filler track that Miley felt bad leaving off the standard version and she stuck it on the deluxe version.

Cyrus dips into the hip-hop genre more than once, but it feels more like a mish-mash of country, rap, hip-hop and pop. The album is called "Bangerz" because it is jam packed with bangers (songs that you can rock out to). Each song either oozes maturity or oozes glitter; "Bangerz" is loud, lewd, not subtle, filled with attitude and strangely addicting. The album will vibrate the heck out of your eardrums and smack you across the face with honesty.

Check out all things Miley Cyrus at www.mileycyrus.com.
Email ThisBlogThis!Share to TwitterShare to FacebookShare to Pinterest