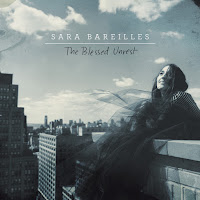 "The Blessed Unrest" is Sara Bareilles' fourth album. This album functions as more of a transitional album, a collection of 12 tracks that cater to adult contemporary radio. Some of the risks she took don't pan out, but she can be commended for extending her wings outside of cranking out tracks that contain her own vocals layered over a piano led sound. She remains nuanced in her vocal and musical orchestration choices. The singer-songwriters poetic expositional tracks are always poignant in some form. Each track transitions to the next in lyrical content and lingers in some thoughts. While each song isn't necessarily a hit, she has fleshed out the concept—it's not always about bells and whistles. Her unrest may have blessed her, but this album is not the best in her discography.

"Brave" is inspirational in a time when music aims for the next summer anthem and a songs befitting for a twerk session. Bareilles fits in an encouraging message, that has possibility to be a gateway for somebody to come out and say something they have been hiding. One may lose sight of how strong they really are, until they remember that it's time to scream from the top of your lungs, "I want to be brave!" That might not fix the problems you are facing, but knowing that you can and have the power to be brave, can motivate you to be stronger and better is precisely why "Brave" is a perfect album opener. The next track, "Chasing the Sun" is about her recent move to New York. The production is slick with synths, percussion, and of course, piano. "Hercules" is mid-tempo track that shows off Bareilles' vocal range as she is searching for inner strength.

One of the hardest things in life is loss, may it be through death, separation or mutual agreement. It's hard to simply move on, believing that all is well simply because you want to try and be happy. The truth of it all, is that the best thing that can occur is to lose that person. It's an easy way to hide the pain, but its not that easy when you're a singer. Bareilles' vocals and the piano make "Manhattan" a ballad with sad drenched lyrics only become more sad and emotional. "Satellite Call" is like a mashup of a Alanis Morrissette circa havoc and bright light/ Coldplay song. It's a bit of a departure from the sweetness and lyrical content Bareilles has been know for, but still becomes an anthem. The vocal mix is certainly different, it's sad Sara trying to be optimistic, nothing too special; but something that somewhat appeals to the ears, this is definitely going to be put on the random song playlist...but I probably won't listening to the full song. In "Little Black Dress," Bareilles is back with her signature sassy snark and hand clapping sounds—and showing off her lustful side. The vulnerability is clear and she delivers another great vocal—but when has she ever produced a track that isn't vocally perfect? This song is repeat material and radio ready, you'll never get tired of the message as she sings "I'm not ready to let you go away from me/ So I got to say/ I want to get you, I want to get you/ Out of your dress/ Your little black dress."

"Cassiopeia" is the epicenter of the entire album and it is a lyrical experiment. It goes from a cool, haunting voice to a wonderfully orchestrated set of violin chords and her full voice in the chorus only adds to the overall cheerful tone of the song. The story: a star and how it forms to be something new over time. "Collide!" Bareilles exclaims. The collision will only make me stronger, wiser, better, smarter. The star goes through its journey, out, in space, alone yet powerful, independent, majestic and beautiful. Nature at its greatest, simply beautiful. Bareilles is captivating in "1000 Times" as she pleads for the love of someone. She is burning with anger on the inside and wrought with hopelessness Anything that follows the last track has its work set for it, however "I Choose You" stands up for itself. Plucking strings and softness in the vocal and vocal layering make this track one that you can sink into and relax. This is a perfect track to play at weddings.

There is a disconnect with "Eden," it serves as filler where an artist tries to extrapolate a tiny bit more from a topic previously used. The rest of the album has a unified theme of falling in love and losing it. It doesn't mesh well with the other songs, due to the approach of the subject. All the songs are either empowering or tragic love songs, whereas "Eden" is an abstract idea of what it feels like when you are in love. "Islands" is a curtain call of sorts; Bareilles gave up on romance and is focusing on herself once again. The song is very settled and doesn't crescendo at all, it serves as a vessel to showcase the nearly soothing vocals she was born with. Bareilles' unrest and uncertainty is encapsulated in "December," a ballad about ending something and the optimism around the next chapter.

Mariah Carey can (used to be able to) hit the high notes, Fantasia's voice has a unique scratch to it, Katy Perry, well, umm, yeah, she's Katy Perry and Pink is feisty and fierce as always; but Sara Bareilles will forever be known for her sad, piano led ballads and anthems. "The Blessed Unrest" doesn't fizzle into something great, nor does it stay static. It was bore during this time of uncertainty and new chapters as Bareilles. It is deep, inviting, melancholy and sharp. The eloquent and concise lyrics make this album destined to be understood by just about anyone.

Check out all things Sara Bareilles at www.sarabmusic.com.
Email ThisBlogThis!Share to TwitterShare to FacebookShare to Pinterest