Album Review: Side Effects Of You [4/5 stars] 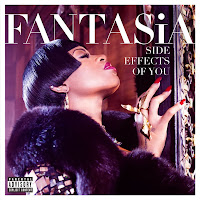 Fantasia Barrino, American Idol winner, turned actress has overcome her fair share of hurt and disappointment, coming out stronger after each moment. She has conquered all the necessary to-do’s of the Entertainment industry: She has her own Lifetime Movie (Life Is Not a Fairytale: The Fantasia Barrino Story), starred on Broadway (The Color Purple), had a reality show (Fantasia For Real) and been accused of breaking up a marriage among other things. Assuredly, after each step forward, she takes 3 backwards, leaving her with little confidence and a bruised ego. Her 4th studio album, "Side Effects of You" sticks all she has been through since her last album into a blender and delivers a vintage rock soul album, co-writing 7, of the 13 tracks.

Tasia (her nickname) starts the album off summoning all her confidence into an awesome vocal show, without letting her voice stomp all over the drum led song. Although it doesn’t need a cameo by Big K.R.I.T with his measly, minute long verse, it is easy on the ears. In the following song, Ain't All That Bad, she then quickly loses some of her confidence, regretting falling quickly in love and gaining some confidence in the following track "If I Was A Bird," that beautifully layers her vocals in an inspirational filled mid tempo song. "Girl Talk (Interlude)" candidly shows Barrino in the studio with Kelly Rowland chatting about love, that results in an impromptu song leading into the adjacent track, "Without Me," featuring Missy Elliott and Rowland. It delivers vocal bliss—that seems misplaced musically, packing a punch lyrically.

Harmony Samuel’s leaves an unforgettable mark, receiving producer and songwriting credit on all the songs, except "Side Effects of You". It is an emotionally charged track as Tasia realizes the man she is with came with a set of disastrous side effects, showing off her vulnerable side, without letting her voice spiral into a scratchy register. This standout track reeks with injections of real life situations (for those of you who are going to Google it, she swallowed a bottle of pills in an attempt to relieve the grief she felt after unknowingly dating a man who was not legally divorced, but told her he was).

In "Get It Right," Barrino is telling her man that he better step up, or she’s gone and the song turns into a call-and-response jam session, never veering too far from her gospel roots. Lighthouse proclaims proudly, “Tryin’ to shut me up, tryin' to hold me down/ Never turning off cause I’m a lighthouse” and is a perfect transition to the first single off the album, "Lose to Win" that relies on a bass guitar and periodic synth. Tasia finally realizes the relationship she has must be sacrificed in order to win at life. The final track, "In Deep," is another vocal that can be praised as Barrino realizes she wants to give her all to a man, perhaps a new man.

Fantasia’s return to music is triumphantly epic and flawless, she nails every song and clearly she isn’t going to let anyone lead her in any direction, musically, vocally, or in her personal life. Her realness, vulnerability and gusto make her a musical force that can’t and won’t be stopped. The side effects of this album surely won’t be negative for her self-esteem and sanity.

Check out all things Fantasia Barrino at www.fantasiaofficial.com.
Email ThisBlogThis!Share to TwitterShare to FacebookShare to Pinterest