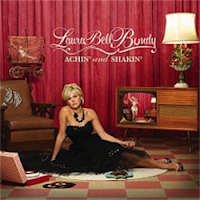 I just bought Laura Bell Bundy's much awaited country album, "Achin' and Shakin'." The star left Broadway to go back to her southern roots, down in Tennessee. I was deeply saddened to find out that she was leaving the smash hit Broadway show Legally Blonde: The Musical. Then I found out she had been longing to release another CD, this time she’d being going Mainstream. Fast forward about a year, and as I happen to be at Target I ran past a CD that for some eye caught my eye. It was Laura Bell Bundy! She's trying to get to the top by achin' and shakin' her way there. She split the CD into two sections, half of the songs are Achin', and the other half are Shakin.


The Achin' songs are for when you’re not in the best of moods. They have a somber undertone and on the lyric sheet it says "This is the sad story of getting lost and finding oneself beyond, temptation, regret, heartache, and loss" Whereas, the Shakin' songs are for when you’re in the mood to belt out a song while you drive down the street. They have an upbeat in tempo."This is the sassy story of losing, love, getting over it and finding new love again" according to the lyric sheet.

My personal favorite among the Achin' songs are Cigarette, Homecoming Queen, and When It All Goes South. They have that somber thing going on, they are about regretting what you did, but loving it; never apologizing for who you are, only for what you have done; and love knowing that it will be cut short and goes South...literally and symbolically. The Shakin' songs are all solid, I couldn’t choose a personal favorite. The songs have stories that range from breaking up with your man and being complete numb after it, to meeting the new lover and falling in love and, finally finding "Mr or Mrs right."

There are the two lyric books included with the CD. Each song has a small phrase that encompasses the thought for the song. This is extremely creative and has to my knowledge never been done. She has the makings of the next Carrie Underwood. It’s a good CD that takes you through the story of love, breaking up, making the guy jealous, and finding a new "mr right."

You can stream Laura Bell Bundy's music by going to www.laurabellbundy.com/streaming.
Email ThisBlogThis!Share to TwitterShare to FacebookShare to Pinterest